Artists of the Industry In Magnolia Magazine 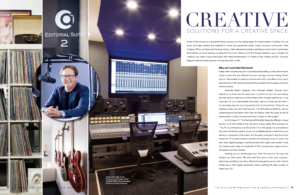 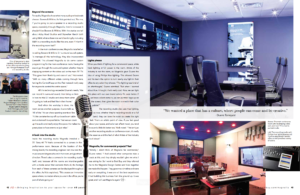 Artists of the Industry is a forward thinking company on the cutting edge of content creation, building not only audio and video content, but material for virtual and augmented reality. Duane Tornquist: Co-Founder, Chief Creative Officer and Executive Producer told us, “We’re developing tools to distribute content like it’s never been done before, so we’re looking out ahead of the curve.” When you’re this forward leaning in your thought and creativity, you need a space that aligns with these fundamentals. For Artists of the Industry and Mr. Tornquist, Magnolia was the perfect partner to bring that vision to life.

Artists of the Industry may be in a professional building, but the desire was to create a space that was different than your average business setting. Duane told us, “We wanted to create an environment that’s more like a living room, that’s like home. We wanted a place that has a culture where people can come and be creative.”

Magnolia System Designer, Nick Fritzinger, added, “Duane’s vision helped let us know that this wasn’t just a conference room we were doing: this was really an extension of what Artists of the Industry wants to be. It was important for us to demonstrate the artistic nature of what they do here in an interesting way that went beyond the feel of a boardroom. To do this, we created a video wall with three Sony 65″ TVs, all butted up perfectly, with no creases beyond the bezels. Now they can display video that goes across all three screens, or they can show individual content on each screen.”

For the larger 75″ TV at the head of the table, Magnolia offered a unique solution to fit with Artists of the Industry’s unique needs. Nick pointed out, ”The 75″ is a showpiece, and like all the TVs in this space, it is connected to the video distribution system, so you can wirelessly deliver content from your phone or computer to the screen. But the really cool part is that the mount allows this TV to rotate between portrait and landscape views. If Duane and team have digital signage or advertisements that might need portrait mode for a kiosk project, they can rotate the TV 90o to display the content just as it will appear out in the market.”

Nothing was an afterthought here. Even the brand of TVs was well thought out. Nick noted, “We went with Sony due to their color accuracy— that’s a big need they have. Sony offered the best performance: when they’re rendering on their Apple computers, they’re getting the same quality on these Sony TVs.”

For audio, Magnolia chose what many audio professionals choose: Bowers & Wilkins. As Nick pointed out, “For me, if you’re going to put a speaker in a recording studio space, especially through Magnolia, there’s no reason it shouldn’t be Bowers & Wilkins. With the stories we tell about Abby Road Studios and Skywalker Ranch both using B&W, what a disservice we’d be doing by not using B&W in a recording studio like this one, even if it isn’t in the recording room itself.”

In the main conference area, Magnolia installed an in-ceiling Bowers & Wilkins 5.1 surround sound system. To manage all this technology, they also incorporated Control4. This allowed Magnolia to do some custom programming for the main conference room, having the sound go through the surround system whether they’re displaying content on the video wall or the main 75″ TV. “This gave them flexibility and ease of use,” Nick noted. “With so many different artists coming through here, having the Control4 app on the iPad makes it really easy for anyone to control the entire space.”

All this technology exceeded Duane’s needs, “We can record in surround sound, then bring a client in here to this 5.1 studio and show them what it’s going to look and feel like in their home.”

And when the workday is done, the room serves another purpose. Duane told us, “All of the TVs can show sporting events or live TV. We can take the top off our boardroom table and underneath is a pool table. Then we can crank up the audio and really enjoy the space. It’s makes it a great place to have events or just relax.”

A look into the studio

Inside the recording studio Magnolia installed a 75″ Sony 4K TV that’s connected to a camera in the performance room. Because of the location of the mixing board, the recording engineer can now see the musicians and singers who are in that room, and give them direction. There’s also a camera in the recording studio itself, and, because all the rooms are interchangeable with a media server that connects them all, the footage from each of these cameras can be displayed throughout the office. As Nick explained, “This creates an immersive space where, no matter where you are in the office, you’re part of what’s going on.”

When you think of lighting for a commercial space, white track lighting at full power is the norm. Artists of the Industry is not the norm, so Magnolia gave Duane the idea of using Phillips Hue lighting. This allowed Duane and his team the option to turn nearly any light in their office to any color they choose. “The lighting was kind of an afterthought,” Duane admitted. “But when I learned about Hue, I thought: that’s really cool. Now, we can light this place with our own brand colors. Or, even better, if we have a client come in, we can put their logo up on the screen, then glow the room to match their color palette.”

The recording studio also uses Hue lighting, so now, whether they’re recording vocals or a full band, they can tune the room to create the right feel. “From an artistic point of view, if you feel good about your space, and color can affect mood, you tend to sound a little bit better too,” Nick noted. “This isn’t just another recording studio or conference room, it’s really the essence and the feel of what Artists of the Industry is all about.”

“Initially I didn’t think of Magnolia for commercial,” Duane noted. “I had several other companies take a crack at this, and they simply wouldn’t give me what I was asking for. So I went to Best Buy, and they referred me to the Magnolia Design Center and Nick: together we made this happen. They gave me a timeline and were early on everything. It was one of the best experiences I had building this business from the ground up. It was great, and I will use Magnolia again.”