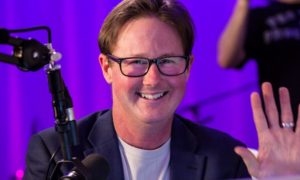 Today we’d like to introduce you to Duane Tornquist.

Duane, please share your story with us. How did you get to where you are today?
First, I am a huge music fan. Second, I fell deeply in love with the art of technology-driven presentation, showmanship and building something from nothing in concert with enjoying collaborations with highly creative talented people.

As a child in Southern, California, I was that strange kid who would produce the local backyard theaters, promote concerts and build events like the soapbox derby street racing or anything to entertain the neighborhood with an official VIP ticket issued to anyone that would play along. Didn’t every neighborhood have a strange kid like me?

Later as a teen, relocated to Arizona, I became the leader of the band, created a local rock magazine and started several small businesses related to my love for playing music in a group, writing songs, recording and designing theatrical stages and promoting. We were always winning awards for being the most theatrical, ala Alice Cooper, Kiss, Peter Gabrile. Then off to Hollywood.

After dropping out of college in Arizona, I headed to Hollywood with the band. The band split and I remained in Los Angeles alone. I quickly landed an entry-level position at the world-renowned A&M Recording Studios in Hollywood, California. I started by cleaning the bathrooms, making coffee and running for food for music industry leaders such as Jimmy Iovine, Shelly Yakus, Tom Petty and the Heartbreakers, U2, Bruce Springsteen, Guns & Roses, Don Henley and just about every major act in the music business, followed by time as a mastering engineer at Ocean View Digital Mastering Los Angeles working for Joe Gastwirt, where I assisted on the remastering of the first three Jimmy Hendrix albums for CD production on MCA Records. The work ethic that was the music industry at that time stayed with me and helped shape who I am today. Thank you, Jimmy Iovine Shelly Yakus and Joe Gaswirt! Successful careers always include the help and love from others.

The next chapter of my life following the slow death of the music business in the late 90s and early 2000s was centered around the corporate events industry, where I continued in the technical field, followed by a sales position in which my calling was found and eventually as an SVP of Creative and Chief Marketing Officer for an event production company that specialized in the hospitality industry paired with fortune 500 companies producing product launches, entertainment shows and special events around the world.

In the position of the company’s CMO working side by side with CEO of American Audio Visual Center, Jim Carlson, we grew the business to over 125 million dollars in annual revenue.

January of 2015, the company, AAVC that I was employed with for the past 16 years was sold to a larger company owned by Goldman Sachs. I was retained as the interim SVP of Marketing until my departure in June of 2016. In August of 2016, Artists of the Industry (AOFTHEI) was born. Incubated for one year in a nondescript corporate center in Northbrook, Illinois at 1945 Techny Road, Unit #12, Artists of the Industry and its culture of creative collaboration and innovation is in full motion working with brands such as Marriott Hotels, Coca-Cola and others.

As the company continues to approach the business of content creation, through the modern use of virtual, augmented reality and 360 immersive videos and audio production, AOFTHEI’s music group prepares to launch the agency’s new music bed service, offering high-quality music production from professional composers, songwriters and staff producers.

The AOFTHEI music service and sound design studios were a concept long before the company opened its Northbrook brick and mortar location. “Music is and will always be at the heart and soul of Artists of the Industry.” The sound design component is in place for several reasons. First, it is the passion and driving force behind its founder Duane Tornquist. Whenever asked what has been a consistent influence on his life and work, the answer is always music and the art of sound. I must have music at an arm’s reach at all times while working. I need to build networks of music creators in both analog and digital disciplines in order to keep the musical soul in concert with creating music into the future to combine with new technologies such as Virtual Reality.

At the core of the AOFTHEI culture is the belief that anything is possible. We knew that we would eventually create a successful business. What we did not know is how fast things would take off for us. The word has started to get around the corporate and hospitality industries that we are working on some very cool new projects including custom interactive software that brings content production, virtual reality and interactive to create sales, marketing and training platforms within gaming engine development tools like Unity 3D building environments in Oculus, HTC Vive and other newer VR, AR and AI User experiences.

To bring it all home, Artist of the Industry is a complete experiential event marketing and production company, partnering with corporations and associations to produce product launches, tradeshow, and company internal and external communications content and platforms.

Content is king and is second in line to a company’s culture. We start with the number one priority which is people; we add the ingredients of technology, innovation, thought leadership and pure passion for the art of creating content. This recipe, once properly seasoned and fully baked has created something special, Artists of the Industry, an enterprise of Open Minded Companies, Inc., the dream and vision of founder Duane Tornquist and his partner Jim Carlson.

Great, so let’s dig a little deeper into the story – has it been an easy path overall and if not, what were the challenges you’ve had to overcome?
With any venture or worthwhile quest, there are going to be challenges and obstacles.

Artists of the Industry have had many. Even now the company has only been incubated for one year, the challenges of creating something that included a brick and mortar facility and starting a concept of working with remote artists as its formula, created a series of big challenges for AOFTHEI as a startup. These challenges eventually changed the original concept from a global workforce to a centered focus on talent that resided in the area of the studios.

Since this change, AOFTHEI now has a workforce of both local senior managed talent and a restructured regional network between Los Angeles and Chicago. The challenges have allowed the company to experience an increase in the level of remote talent. The secret is realizing that you can’t ever rest on your laurels, while always nurturing the relationships around you. Chicago has some of the most amazing talents. The creative schools are in abundance throughout Illinois. We also learned of a huge connection between the great talent in Chicago and that in the Los Angeles area. When we first started, we utilized many Arizona based freelancers due to the company’s original corporate headquarters being in that state, though we maintained a select few of the AZ relationships, we shed most of our remote Arizona based staff and replaced them with talent from the Los Angeles area to work hand and mind with our Chicago leadership to create the perfect talent structure that works well with our high-end clientele. This is what our market demanded. The initial challenge was the time needed to recruit and the painful discovery that our talent pool needed several jumps in skill and experience, once we learned about our true opportunity at hand. Fortunately, we learned the need for new localized talent during the development of our launch content, which needed to be extremely well executed and all in house. The challenge is we had a deadline looming and only days away. This challenge introduced us to our current team in place, which we call Artists of the Industry.

Artists of the Industry – what should we know? What do you guys do best? What sets you apart from the competition?
We are a collaborative built by artists. Artists of the Industry is a complete experiential content marketing and production agency. We create emotionally connecting original content for businesses and brands. Our content creation focuses on everything that includes visuals, sound and interactive technology custom designed and created to experience and emotionally connects a brand, product or movement with its audience.

We operate under a philosophy of something called SCAMPER. The meaning of SCAMPER is Substitute, Combine, Adapt, Modify, Put to another use, Eliminate, and Reverse.

We have a virtual and augmented reality development team working in labs based in Chicago and Los Angeles that create virtual and interactive tours, training, sales and marketing platforms. Along with a focus on new interactive technologies, we create original music, cinema and produce stunning events, utilizing and the best creative and artists in the business together with the latest in production technology. Our studios in Northbrook, Illinois feature a world-class music and sound design studio, cinema production, color and Unity 3D suites.

We develop software for trade shows, live events, interactive touch screen, VR, AR and AI experiences designed to emotionally connect with an audience and drive return on investment and value to the customers we serve that we call our customers for life. We are primarily a service company and culture. Wowing people and creating a better world for our partners is our number one goal.

The company’s founder Duane Tornquist is the host of the Artists of the Industry Podcast, on the AOFTHEI Radio Network, produced at the Northbrook studios. The Podcast started as the company incubated with the first episodes spotlighting the local Chicago and Los Angeles talent. The latest episode featured Grammy-winning producer, engineer and music industry pioneer, Robert Marglouleff.

What moment in your career do you look back most fondly on?
There are many proud moments in our career so far. Here are just a few:

My proudest moment is certainly the realization that we have built an amazing team, referred to as our “Brain Trust”. The term borrowed from Ed Catmull written about in the book Creativity Inc., The Pixar Story.

The second proud moment is the finished construction of our studio locations in Northbrook, Illinois. The Artists of the Industry studios boast a beautiful recording, sound design and music creation space, various cinema and interactive studios, performance stage, chroma key, green screen and client/talent collaboration space, designed for pre and post production with all of the comforts of home, including a custom built conference table that doubles as a pool table, utilized on networking days including the company’s Friday Sessions where AOFTHEI invites professional musicians, engineers, songwriters, composers and music producers in to use the studios and collaborate. The amazing new content that has recently been created is soon to be released on aofthei.com

The newest most proud moments happened within a few weeks of each other. Recently AOFTHEI has landed the business of two of the biggest brands headquartered in the US, Marriott Hotels and Coca-Cola with two separate undisclosed and confidential interactive marketing projects.

The key to all of these proud moments are due to the fact that the founders spent almost two decades working side by side, creating a culture and list of dedicated partners and customers for life that enabled Artists of the Industry the luxury of a quick and successful launch filled with new wins and new relationships.

Meet Duane Tornquist of Artists of the Industry in Northbrook